creating a world of joyful belonging

Let’s Just Do It

I’m working with two colleagues at Futerra to launch a website about the CSR community’s embarrassing handle of BP before and after the oil disaster in the Gulf 71 days ago.

It’s the first really exciting project I’ve been involved in for a little while – and I’d forgotten how good it feels to be doing something. Which reminds me of the immortal line from this soon-to-be-released awesome film ‘Just Do It‘,

‘We’ve got four D-locks, let’s just fucking do it.’

Seeing Past The BP Disaster

Sometimes I’ll come across a piece of writing that manages to put into words ideas that have been floating in my brain with such elegance that it hurts.

This short essay in Worldchanging is one of those. Alex Steffen manages to point us past the blame games and look at the wider systematic issues surrounding the oil industry. He smacks down the idea that individual consumers somehow are responsible for this – it’s just a brilliant read from start to finish.

This is filled with some of the most quotable lines ever.

‘As you can see it’s a favourite because it’s deep, like underwater drilling’

‘Oil is too valuable – put it on the canvass’

‘They’ve just splashed it on here, a little as if the ocean was their canvass’

David Cameron and other heads of state are preparing to abandon a commitment to phase out oil and gas subsidies, a leaked document has revealed.

The G20 communiqué indicates that eliminating the estimated $250 billion to $500 billion countries pay to make fossil fuels cheaper will now be made “voluntary” and “member specific.”

This comes in marked opposition to promises made at last year’s G20 meeting in Pittsburgh, PA, where leaders committed to “phase out and rationalise over the medium term inefficient fossil fuel subsidies while providing targeted support for the poorest.”

The G20 nations estimating a greenhouse gas emissions reduction of 10 percent by midcentury and pledged to have energy and finance ministers develop “implementation strategies and timetables” to fit their particular countries’ needs and to report back this year.

Civil society organisations are pointing to the continued watering down of international commitments incentivising clean energy. “Last year, there was ambiguity around timetables; it was unclear who was going to do what by when – but they did all say they’re going to phase it out. Now they’re going to say – they’ll do it when they feel like it, and everyone can interpret it differently,” said Steve Kretzmann, Director of Oil Change International.

The developed world currently gives around $100bn a year to the fossil fuel industry in subsidies – one of the reasons ExxonMobil didn’t have to pay any US tax in 2009.

The Toronto G20 meeting takes place as the BP oil disaster continues to pollute the Gulf, and activists prepare for the largest day of action against off-shore drilling in US history.

Greenpeace have put out a statement saying;

“Subsidising the likes of BP, oil disasters and climate change is nothing short of insanity… Governments passing one hundred billion dollars a year of taxpayers’ money to big oil and coal is immoral when compared to their refusal to provide the same amount of money for the poorest countries for climate change adaptation and mitigation.”

I headed straight to the Drum ‘Em Out BP protest after work. (A little intro video for you here.) How I ended up in the front row of the samba band, I’m not sure, but it was good fun all round. Great how music always negates any aggression or tension, though some cringe moments could have been avoided. (I swear, when I next organise a protest, we’ll have a fashion vetting process.)

On returning with a severely damaged wooden spoon and a heavily beaten salad bowl, I discovered this gem – Apologize to BP. Naturally, it’s already all over twitter. Some classics already include:

Dear BP – I’m sorry for worrying about gas mileage. It was selfish of me #imsorrybp

Protest takes many forms – anger, humour, tears. We need them all.

The Century Of The Self

I love a good documentary.

This fascinating BBC doc is about how those in power have used Sigmund Freud’s theories to try and control the dangerous crowd in an age of mass democracy. Uncomfortable to watch in the sense that it makes very clear the effect that individualism has been encouraged by business and politics, but ultimately leaves us powerless.

Not exactly date-night material. (Unless you get off on a mix of psychoanalysis and 20th century power structures. In which case you should see someone.)

Catwalk vs The Street

My daily dose of fashion inspiration comes, as it does for many thousands, from The Sartorialist.

Each morning, I’m greeted with an interestingly dressed individual, able to capture a timeless style through an eclectic, or perfectly matched, ensemble of clothes and accessories.

Today, however, the blog featured some of the new collections on the catwalks of Milan. This is Dolce & Gabbana.

It’s utterly gorgeous of course, (as is he), but it’s also something so impossible for mere humans to re-create, that it ultimately depresses me.

Compare this to Lorenzo from Milan, featured on the Stil in Berlin blog, and my response changes immediately. The image captures a knowing playfulness, the model’s character and something deeper than aesthetic idealism. I want to meet this person, rather than just gaze at the beauty of the image.

As the saying goes – comparison is the death of happiness.

Hot on the heels of Seth Godin’s post on the difference between gifts and favours, I found Flavors.me.

I’ve been umming-and-ahhing about whether to invest in a web-designer to put together a simple website, and even found someone who actively wants to be paid in cake. Instead, this fantastic site allows you to design your own simple online-calling card. Here’s mine: 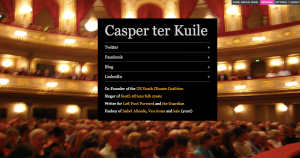 Definitely check out the awesome stuff others have come up with too.

You are currently viewing the archives for June, 2010 at Casper ter Kuile.