creating a world of joyful belonging

I had come to Detroit to learn how policy makers and communities could respond when systems fail – and in this city that failure is evident wherever you turn.

Since the mid-20th century, Detroit’s public story has been one of decline. Hundreds of thousands of auto industry jobs lost to automation and globalisation. A city of 2 million people shrinks to less than 720,000. High unemployment and wealth flight to the suburbs leaves the city on the brink of bankruptcy. 32,000 houses have no sanitation. 40,000 have no electricity. 67,000 parcels of land have been foreclosed.

But the collapse goes far beyond the economy.

55% of people of colour in the state of Michigan live in districts where their elected officials no longer have any fiduciary power. The Local Government and School District Fiscal Accountability Act signed into law last year means that unelected managers now control pensions systems, union contracts, school curricula and dissolving municipalities. This widespread disenfranchisement is profoundly undemocratic.

Violence from police and within communities is sky-high. This summer saw 20 murders within 10 days. The death of seven-year-old Aiyana Jones in 2010, shot by police while asleep in her bed next to her grandmother, tells the story of an ever increasing militarisation of law enforcement and ill-will between cops and the community.

Over four days, 35 of us visited organisations around the city who are part of this explosion of community-led innovation. In an old yellow school bus we learned about efforts to rebuild and ‘re-spirit’ Detroit’s work, education and food systems as well as learn how activists in this city have approached social change.

The collapse of the old economy is impossible to ignore in Detroit. 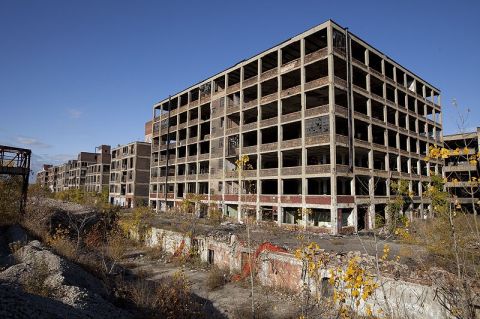 Our first stop was the 3,500,000-square-foot carcass of the Packard Plant, left standing by its owners because it would be too expensive to safely take it down. Professor Emeritus of philosophy at the University of Michigan Frithjof Bergmann, whom we met for lunch in the basement in a local church, points to this type of building as a symbol as the ‘Job Economy’. In this model of economic production, workers look at work as a mild disease – looking forward to the end of the working day. He used some colourful language to describe the ills of the current system of work – this one being my favourite!

“We burn violins and pictures of our children in order to fuel the fire under the kettle of our economy.”

But his critique is insightful.

“Most people assume that the job system we have today has existed since the Stone Age, and that it is therefore unthinkable that we could suddenly run out of jobs. But our job system is actually only 200 years old!

The current job system is based on the idea that jobs redistribute wealth: capitalists made profits, the profit was distributed when workers got paid, and the workers again helped the capitalists to amass wealth. So it was like rain: the profits rose to the top, but then they came down like rain in the form of wages.

This is now no longer the case in the same way as it was before. It is very possible now for people to make very large sums of money without employing anybody, either by buying whole companies in leveraged buy-outs and piecing them out like a butchered cow, or by having factories that employ very, very few people.

One of the really frightful aspects of this situation is that we have something like a third of the population working at an utterly insane pace, and on the other side, close to half of the population is obviously underemployed. It’s crazy.”[1]

In contrast, Bergmann points to the ‘Work System’, where work has personal meaning, skill and social purpose and is structured differently.

Avalon Bakery in Detroit is one such example. A worker-owned, values-led company, it not only makes incredibly tasty salt-chocolate chip cookies, but it has been at the heart of one block’s economic renewal. After its own initial success, it opened up lines of credit to other entrepreneurs next door so they could buy their first load of stock. It also has loans for staff.

The Catherine Ferguson Academy for pregnant and parenting teenage women was one of the highlights of the learning journey, where we met the Principal and Superintendent. As well as high-quality teaching for the students (including solar power installation), students’ children can come to school three days after birth. Rather than having a crèche, the school has high-standard early child development so that both mother and child have the opportunity to grow.

Outside the school is an urban farm where permaculture methods extend the growing seasons and goats and chickens are kept. Students cannot graduate until they have grown, harvested, cooked and eaten produce grown in the school farm.

Most extraordinarily, 10-15% of students at any one time were experiencing insecure housing or homelessness, so they decided to create a housing facility. Naturally, they decided it would be an intentional community, so they’re now exploring different models of democracy and consensus decision-making. They also choose to build a Living Building – using reclaimed materials and green building materials like straw bales to construct the living space.

Detroit’s urban farms are now the stuff of legend. There are now over 100 small farms in the city and an estimated 20,000 people are growing their own food. These farms have taken root so deeply because of the deep inequity around food sovereignty. In the whole of Michigan, there is only one black-owned full-service grocery store, even though 85% of Detroit is African-American. Large parts of Detroit are Food Deserts – where residents are only able to buy unhealthy food in gas stations or liquor stores.

We visited Myrtle and Wayne Curtis at Feedem Freedom whose farming isn’t just growing food (“the seeds are the easy part!”) but growing community. Involving young people as volunteers, the farm has become an educational tool as well as providing residents with low-incomes a healthful and bountiful diet.

We visited youth-led art projects, a media-lab, a hip-hop education center, churches, community centers – all with the same language of building relational community and resilience. In organising, we learn that power is the mobilising the commitment people build to one another – and that is being done in spades.

As an activist, what impressed me most were the strong intergenerational relationships of learning and community that existed across projects and organisations. Particularly the role of Elders was evident, Grace Lee Boggs being the most obvious example. Elders nurture leadership – suggesting reading, giving opportunities for learning and recognition, holding people accountable – but mostly just being there as a hand to hold when things are difficult and to reflect on how things are going. Grace is 97. The folks we spent most time with were in their 50’s and 60s. Another layer of leadership were in their early 30s (the products of Detroit Summer), and a new generation in their teens were being actively mentored. All this gives the work people are doing a sense of legacy and place-based history – meaning and connection. (One of the highlights of the entire trip was spending an hour in conversation with Shea Howell learning about her involvement with the Women’s and Peace Movements. Her key learnings from her years of activism: intergenerational leadership and personal transformation.)

Those involved with the Boggs Center – who hosted us – talk often of ‘visionary organising’, as opposed to the models of organising that Saul Alinsky and others promoted. “I would say to a young activist, ‘Do visionary organising.” Grace Lee Boggs explains in this interview with Color Lines,

“Turn your back on protest organising and recognise how that leads you more and more to defensive operations, whereas visionary organising gives you the opportunity to encourage the creative capacity in people and it’s very fulfilling.’”

Detroit social activism is solutionary. Whether building ‘Peace Zones’, or an urban garden – people have learned that when no one is coming to rescue them, all they have is one another. And from that recognition there is a new self-confidence and power. Despite the systemic breakdown – or perhaps exactly because of it – explains Grace,

“People are waiting for a new dream. And that is what we are building in Detroit.”